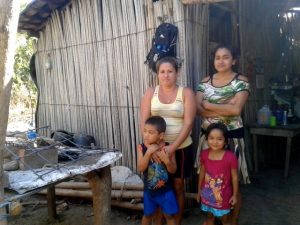 At 18 years old, Margarita has a lot on her shoulders. When her grandfather died last year after contracting the Chikungunya virus (a mosquito-borne illness that creates painful joint swelling, headaches, rashes and can exacerbate other health conditions), she became the sole breadwinner for her household. Up until his death she took care of all the household duties along with her mother and daughter. When he died and she was still without a job, resourcefully she went out every day foraging for food. She picked fruit, caught fish, and grabbed anything that seemed edible along the way in order to put food on the table.

During this time, Margarita and her mother had to be gone a lot getting food and water for the family. One day when Margarita’s 14-year-old sister, María Angela was home watching Margarita’s daughter, Jocelin, they were accosted in their home by gang members. They threatened María Angela and wanted her to work for them. While they went away without getting what they wanted, Margarita remains wary of unsavory people taking advantage of their desperate situation. 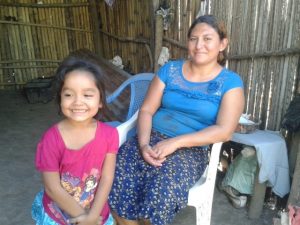 The local pastor and leaders of the Aposento Alto Church first met Margarita and her family when they conducted a census of their community as part of the first step of working with ENLACE and its church and community program. They visited the family’s home and learned of their difficult story. It wasn’t until later when the pastor began to visit them over the course of a few months, that he learned that whenever the church committee came and were hospitably offered food, it was often the only food the family had for that day.

The pastor and leaders were incredibly moved by Margarita and her family and when they began their first community project of building latrines, they put Margarita’s household on the list. In the meantime, Margarita found a job. Margarita now works six days a week as a waitress, from 10am to 2am. And even though she is grateful for the work and her $150 per month, the work is demanding. And so when the materials for the latrines were delivered to the church for recipients to pick up, she didn’t have the time or money to transport the bricks and cement to her home. 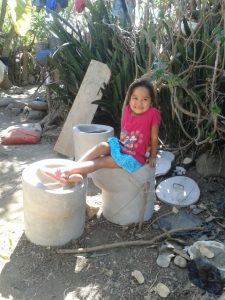 When a church member and neighbor heard of her situation, she offered to help. Even though Wendy, her neighbor takes care of her husband full-time due to a kidney disease, she coordinated a way for them to work together to gather the materials. Wendy and Margarita carried 16 bags of cement and over 1000 bricks to their homes to build two latrines.

In the end, Margarita said that there was a moment when she thought she would give up. She was exhausted. That was when the service team from St. Andrews came to help build her latrine. She saw such joy from them and was so encouraged to be supported by people who came from thousands of miles away. Suddenly between the new friends from the church and new friends from abroad, she didn’t feel so alone

Today, Margarita is incredibly grateful. Not only has the latrine made her family’s life healthier and easier, she has also strong friends from the local church helping and encouraging her every day and checking in on her family. In the next year, the church hopes to implement a new home initiative and Margarita might be one of the first beneficiaries.